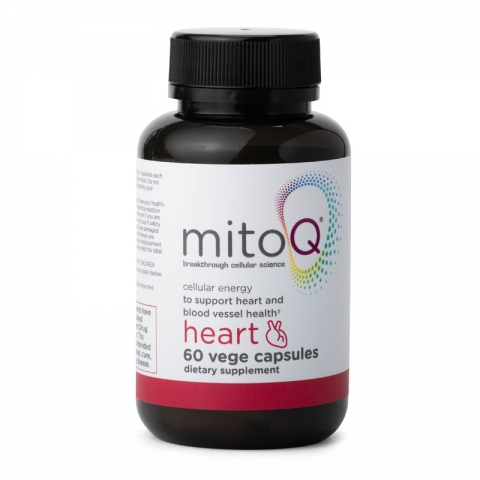 MitoQ is a revolutionary CoQ10 supplement with the patented Mitoquinol Mesylate as the main ingredient. Mitoquinol Mesylate was developed by MitoQ® based on years of research. It is a shortened and positively charged version of coenzyme Q10. In this product this substance is combined with magnesium, which promotes energy metabolism and contributes to fitness; with L-carnitine; and with vitamin D3, which plays a role in maintaining strong muscles and supports the immune system.

Specifically for the heart

The heart is a strong muscle that contracts and relaxes on a fully continuous basis, pumping blood through the body. The cells in the heart require a lot of energy to properly perform their vital function. Besides Mitoquinol Mesylate MitoQ® Heart also contains magnesium, L-Carnitine and Vitamin D3. Magnesium is known to contribute to normal muscle function, to a normal energy-yielding metabolism and to fitness, among other benefits. Vitamin D3 also plays a role in maintaining strong muscles and likewise supports the immune system. In addition, magnesium and vitamin D3 both contribute to the bioavailability profile of this product.

The evolutionary intrigue of mitochondria

Mitochondria are an integral part of our cells, yet we can safely assume that they started as primitive bacteria. During human evolution they gradually entered into a symbiotic union with our body cells: an arrangement that still stands today. As true power plants they provide cells with energy and influence key aspects of cellular functioning. This is probably why mitochondria have been essential to the evolution and development of more complex life forms on earth. Mitochondria are therefore among the more intriguing and fascinating organelles. For example, did you know that they have two membranes as well as their own genome? And did you also know that mitochondria function on the basis of quantum mechanical principles, produce their own water (metabolic water) and even emit weak infrared light (biophotons)?